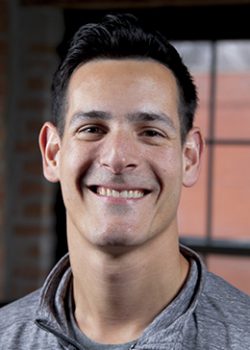 Mike Eisenberg is a Partner and Creative Director at Tall Tale Productions. His documentary film, To Err Is Human, details the consequences of medical errors and showcases solutions to improve patient safety. The film is dedicated to his late father, Dr. John M. Eisenberg, former Director for the Agency for Healthcare Research and Quality (AHRQ). To Err Is Human is being screened at medical schools and conferences throughout the U.S. and will be released to the general public in early 2019.

“There was likely some part of me that always understood the impact of medical errors prior to making my film, To Err Is Human, given my father’s significant role in the patient safety movement of the late 1990s. I knew his work as the Director of AHRQ was important, but I never quite understood it, nor did I try. After all, I was only 17 years old when he passed away in 2002, and the extent of my knowledge about his work consisted of the stacks of papers on the floor of his home office, his stints on television answering complicated questions about health care, and the photo of him shaking President Clinton’s hand in the Oval Office.

To Err Is Human started as a personal curiosity to understand my father’s work in an indirect way. At first, I wondered if the best way to do this movie was to focus on him. But then I asked, “What would he do if he were making this documentary?” I’m sure he would show the world what a culture of safety looks like. But I didn’t come to that conclusion immediately.

The film began with basic questions:

It evolved into a comprehensive look at preventable harm in medicine and those working hard to fix it. It became an extension of the work he was so passionate about, guided by interviews with dozens of health care experts who worked alongside him. It’s clear to me now that he earned his respect not by the people he knew or the acronyms at the end of his name, but by his ability to connect and communicate.

My producing partners and I started by collecting interviews that would steer our story. We spoke with people who had been part of the steady progression of patient safety over the last two decades. We followed threads we didn’t even know existed and looked for ways to add new insight to a discussion that seems to have bottomed out, despite more people working on patient safety efforts than ever before. The shared mindset of them all was, “This isn’t good enough. We can do better.” And in the spirit of my father’s work, we aimed to lift these people up and show others that there are success stories out there. The reason so many keep their heads down is because they don’t believe there is anything to gain by sticking their necks out. We’ve now seen evidence to the contrary. But everywhere we went, it seemed like my father’s influence was still present. And no matter whom we met with, there were always only a few degrees of separation back to him.

We knew that this story couldn’t be addressed by just a presentation of facts and opinions. That’s what drew us to Sue Sheridan, whose story is both tragic and inspiring. It was clearly meant to be when she told us she began her advocacy journey when my father invited her to be part of a panel discussion on medical error at a time when patients were not typically offered a seat at the table. The Sheridan family had experienced two adverse events, playing roles in both her son Cal’s cerebral palsy and the death of her husband, Pat. After Sue went through these life-changing experiences, she could have easily kept her head down. Instead, she has spent the last 20 years sticking her neck out. She has embraced her ability to effect change through her personal story and the belief that the status quo is not enough. Too often, people like Sue have their story reduced to a headline. I find the ongoing story of empowerment to be far more compelling. And when you are in the presence of people whose understanding of health care has been reframed, it’s easy to see how difficult it must be to go face-to-face with one of the most powerful and self-assured industries in the world.

So, what was it that my father knew about the value of including patients in the conversation? How could everyday Americans really play a role in a culture of safety? Many of his colleagues quote him today as saying, “Patient safety is a team sport.” That team involves the patient, but most patients have no idea what role they can play. Health literacy is cripplingly low when it comes to preventable harm and that has made it far too easy for medicine to sweep the issue under the rug. This is why it was so important to us as filmmakers to show clinicians how to invite the patient into the conversation through a culture of transparency and honesty. People are empowered by knowledge, but if they are not in an environment that welcomes it, nothing will happen. We didn’t make this movie to expose some sinister, hidden agenda in medicine. I just think the majority of health systems don’t know what to do. Others simply don’t see the value of investing in it.

The biggest challenge in making To Err Is Human has been establishing the existence of a problem that most Americans don’t even know exists, while prioritizing the solutions that many in health care are still developing. But the reason I love being a documentary filmmaker is the opportunity to address the unfinished story, and to present both the emotional and analytical together so people can have real discussions about what to do next. The reward of reconnecting with my father’s work and hearing the countless stories everywhere we go of his impact on so many people’s lives has made every step worth it. If we can make a difference in the way the health care system functions or just open one person’s eyes to the hazards they face when they go to the hospital, it will be worth it twice over. We will consider this project a success when we can connect the patient and provider in a new culture of safety that embraces the collaborative spirit that my father once promoted.”

If you would like to arrange a screening of To Err Is Human for your community, please contact Mike at mike@talltaleproductions.com or go to www.toerrishumanfilm.com.