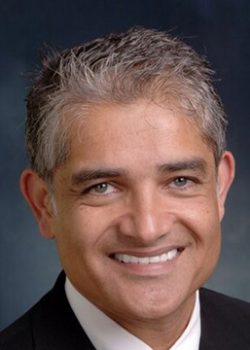 “I clearly remember the first time I walked into the internal medicine residency interview at the University of Texas Southwestern Medical Center. It was January of 2014, and I had made my way from Rochester, Minnesota, where I was based, to Dallas for this interview. As I entered the large welcome hall, a man with genuine warmth in his eyes smiled at me and asked if he could get my coat. He then handed me my name tag and exclaimed to the program coordinator next to him, ‘This is Arjun Gupta. The Guptas ruled the Indian subcontinent 2,000 years ago. We are in the presence of royalty!’ He got a gasp from the program coordinator, and a giggle from me–I had read a few lines about this in 6th grade history, but never since. There were a few applicants behind me, and I excitedly moved along to the breakfast table.

Only later when he went to the podium to address us did I realize he was the program director. I had spent hours looking up the program the evening before, and thought I had familiarized myself with his profile. He was so disarming and natural though, that I thought he was ‘just’ a friendly guy. How many program directors take your coat, know your name and are able to relate to ancient Indian history in the same breath? This was my first meeting with Dr. Salahuddin Kazi.

After hearing him speak at the breakfast reception that day, I knew this was where I wanted to train. His words were unpracticed–you could sense them being formed in his brain as he spoke—yet they were profound, crisp and soothing. Four years later, when I was a chief resident and involved in residency recruitment activities, I had a chance to hear him make the ‘’same” speech. Residency programs typically hold interviews across 10 to 14 days over the course of three months and the second half of the season can sometimes become regimented and practiced. My own 30-second introduction at the pre-interview dinner for applicants largely contained the same joke throughout the season. Dr. Kazi’s 30-minute morning introduction, though, was unique each time. Each week, he would come up with something new. He would describe the program’s mission and values, and his vision for health care, each time with completely different stories, anecdotes and examples. It was mesmerizing, and even though I had listened to him speak week after week, I never get bored. Often he would reference a book he had just acquired that week, which meant he had read at least part of it. He confirmed with me later how voraciously he read.

I always thought this was a special quality, and this was confirmed for me at a Leadership and Value course I took last month. When we were asked which leaders we admired most, I brought up Dr. Kazi and the instructor immediately drew some of the qualities I admired most about him into a framework:

This position paper from the Center of Creative Leadership identified ”Too Narrow Functional Orientation” as the most common leadership pitfall in medicine. Health care leaders in particular are prone to be being ‘super-specialized’ with tunnel vision. No surprise, seeing as they have traditionally been selected as leaders on the basis of their clinical acumen and/ or seniority.

But Dr. Kazi is a refreshing change, and not because he lacks clinical acumen. He is perhaps the most brilliant clinician I have ever met. He is inspiring because he can speak about SAPHO syndrome in the same breath as PDSA cycles; discuss Venice and cricket scores with elan, and have discussions on topics ranging from the Civil War to 401(k) plans with expertise. When he doesn’t know things, he asks questions. He reads. He is curious and wants to learn and improve.

However, all this knowledge is useless if not applied to his primary job—leading one of the largest residency programs in the country. I think his ability to translate learnings from across disciplines to his daily practice allows him to be leader that he is. His mental models, the way he thinks, and the way he approaches issues are what I admire most.

Medicine has so much to learn from other disciplines, and it is important for trainees to have a leader who epitomizes and encourages diverse learning. Ultimately, it is our job to come up with solutions to the health care problems of the world, and I am quite sure medicine alone does not have all the required answers.

With his knowledge and skills, I think Dr. Kazi could serve as the program director of any of our fellowships. I also think he could serve as the hospital CEO, lead the operations of the International AIDS Vaccine Initiative or manage a world XI soccer team. He could quite possibly do all three at once! Modern successful leadership is thought to be more contextual—under-recognizing the coming together of environment and individual to create the perfect storm, and overemphasizing individual qualities and brilliance. I think Dr. Kazi is the exception that proves the rule!

At the end of the Leadership session, I went to our instructor and asked if Dr. Kazi’s work could be replicated. I was really asking, ‘’How can I become that good?’’ The instructor paused, looked me in the eyes, smiled, and said, ‘You have your work cut out for 10 lifetimes.’ ”

Arjun Gupta (@guptaarjun90) is a Medical Oncology Fellow at the Sidney Kimmel Comprehensive Cancer Center at Johns Hopkins, Baltimore. He completed his Residency and Chief Residency in Internal Medicine at University of Texas Southwestern Medical Center, Dallas, under the Program Directorship of Dr. Salahuddin Kazi (@DinoKazi).